One would guess that the pub is named after HMS Royal Albert, which was launched from Woolwich Dockyard in 1854 – the same year that the Crystal Palace was relocated from Hyde Park to nearby Sydenham Hill. Associations with the Prince Consort were doubtless a good thing in the area at the time. 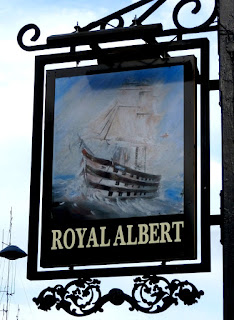 This particular sign takes as its visual inspiration* an engraving by J.W. Carmichael called Homeward Bound, which appeared in the London Illustrated News in 1857. It’s a nice illustration, but it can’t be the ship in question because it appears to have only two gun decks, whereas the Royal Albert had three. This, it would seem, was known to the anonymous sign painter, who accordingly introduced a third gun deck into his picture. If only all signs could be researched so thoroughly…

* Note: not merely copied/nicked – and yes Greene King, I’m looking at you.
Posted by Pubcrawler at 07:01 No comments:

Stand in the corner!

Despite its name – and the impression that might have been given by its previous signboard (see below) – this has always been a pub and has no association with the once-famous Lyons Corner Houses of London. It is so named simply because it is on a street corner. The present building stands on the site of a pub called the Butchers Arms, dating from around 1869, which was rebuilt and renamed sometime in the 1920s.

Although completely unrelated (close inspection reveals that it’s not even a corner house, just a Lyons tea shop), the image on the previous sign had some charm. 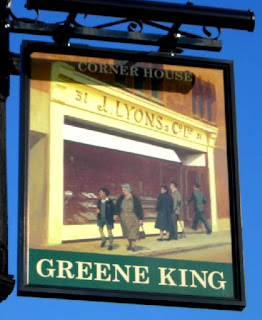 Then in late 2014 it fell foul of Greene King’s widespread ‘brand refresh’ and was replaced with this: 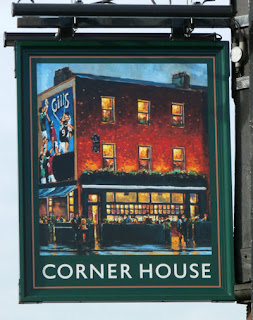 It didn’t take my Camra colleagues long to find the source: Gill’s Corner House, Dublin 356, by Irish artist Chris Mc Morrow. Yes, another ‘lifted from the Internet’ special from Bury St Edmund’s finest. Now it’s not unknown for pubs to have a picture of themselves on the signboard – but to have a picture of a completely different pub in a different country is a little odd, I’d say. Maybe they were hoping no one would recognise it. Ha!

Anyway. Note how the Guinness branding in the original has been blacked out in the sign: well, we can’t be seen to acknowledge the existence of any other breweries, can we, Greene King?

I’m sure all the appropriate formalities surrounding boring stuff like permission and copyright and fees and consent for the marring of original artwork were meticulously observed...
Posted by Pubcrawler at 09:25 No comments:

Having been known as the Crown for most of its life (apart from one brief period when it was renamed the Engineer, presumably to attract custom from the workers at the nearby railway station), this 1830s-ish pub was renamed the Flying Pig in the late 1980s by the then proprietor – and amateur pilot – Mick the Pig. 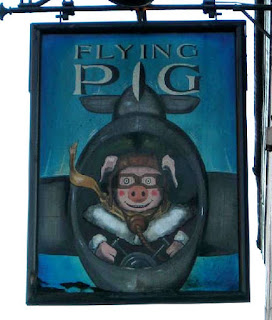 By 2010, however, it was becoming rather weather-beaten and was in danger of becoming the ‘Fallen on Some Poor Soul’s Head Pig’, so it was removed and eventually, in April 2011, replaced by this eye-catching double-sided job, the work of Mr Penfold: 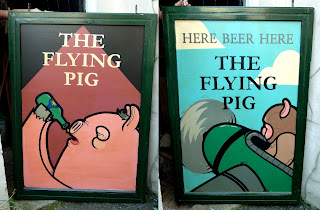 (Update: Well, wouldn't you just know it: as soon as I finally get round to blogging about this sign, it gets taken down because it's too heavy for the bracket. Replacement sign in due course: watch this space (or another one).)
Posted by Pubcrawler at 11:56 No comments: 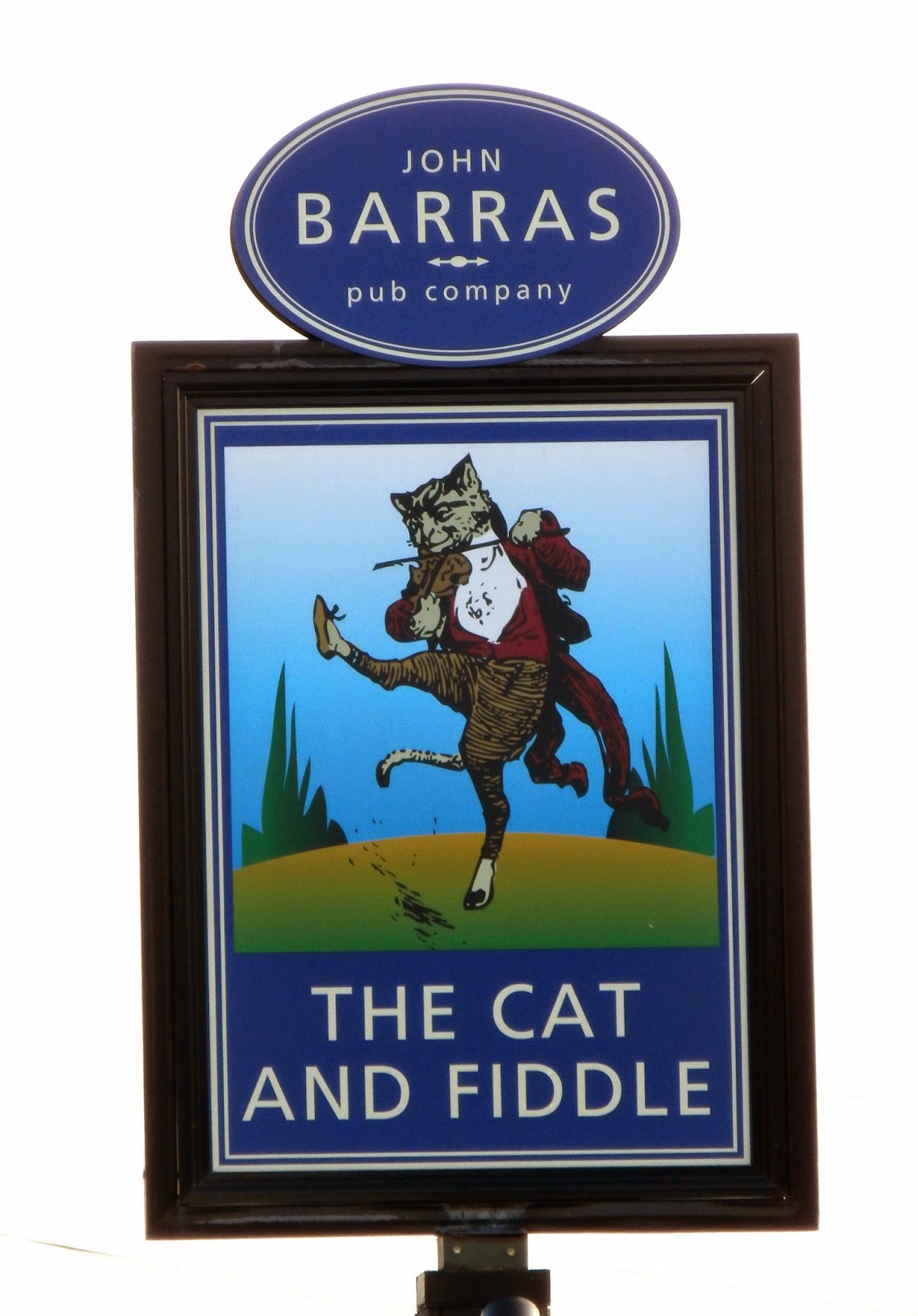 This smallest estate pub on a rather sprawling mid-20th-century estate was probably just about my local when I was growing up. I can say without shame, though, that I’ve never been in, and as it remains real-ale-free, I can’t see myself doing so any time soon either.

The sign, though, I like: it has a certain Tenniel-like quality and charm, though so far as I’ve been able to discover it’s not by the man himself, but an anonymous piece of clipart.

As for the origin of the name, well, everything so far proposed strikes me as fanciful, claw-clutching nonsense so I won’t be acknowledging any of them even in passing.
Posted by Pubcrawler at 08:45 No comments:

A quick note about a couple of new bell-related signs.

First, Burwell. As is the case with most pubs with the word ‘bell’ in their name, the Five Bells stands close to the parish church, the stunning St Mary’s, which Pevsner describes as ‘[t]he most perfect example in the country of the Perp[endicular] ideal of the glasshouse’. And it did indeed have a peal of five bells from c.1709 to 1955, when three further trebles were added, so the pub is rightly named. It got a new sign over the summer. On the left is the sign that graced the Five Bells until about August 2014. A fairly tradition motif, nicely arranged and executed. The new sign on the right, apparently designed by the current licensee, is anything but traditional, an inventive idea of nesting the bells Russian-doll style. I gather opinion in the village is mixed. I think it’s quite a clever idea, and it’s certainly eye-catching, but I can see why others might not like it much.
Back in Cambridge the Six Bells has also finally been visited by GK’s branding facelift pixies. The new sign, as of January 2015, is on the right, another traditional treatment like the old sign at Burwell, t bells arranged symmetrically and linked by a charming ribbon. Inoffensive, and it could have been a whole lot worse. But I have a soft spot for the more unusual sign it replaced, with shiny new bells sitting in he foundry. I hope it’s been kept safe. 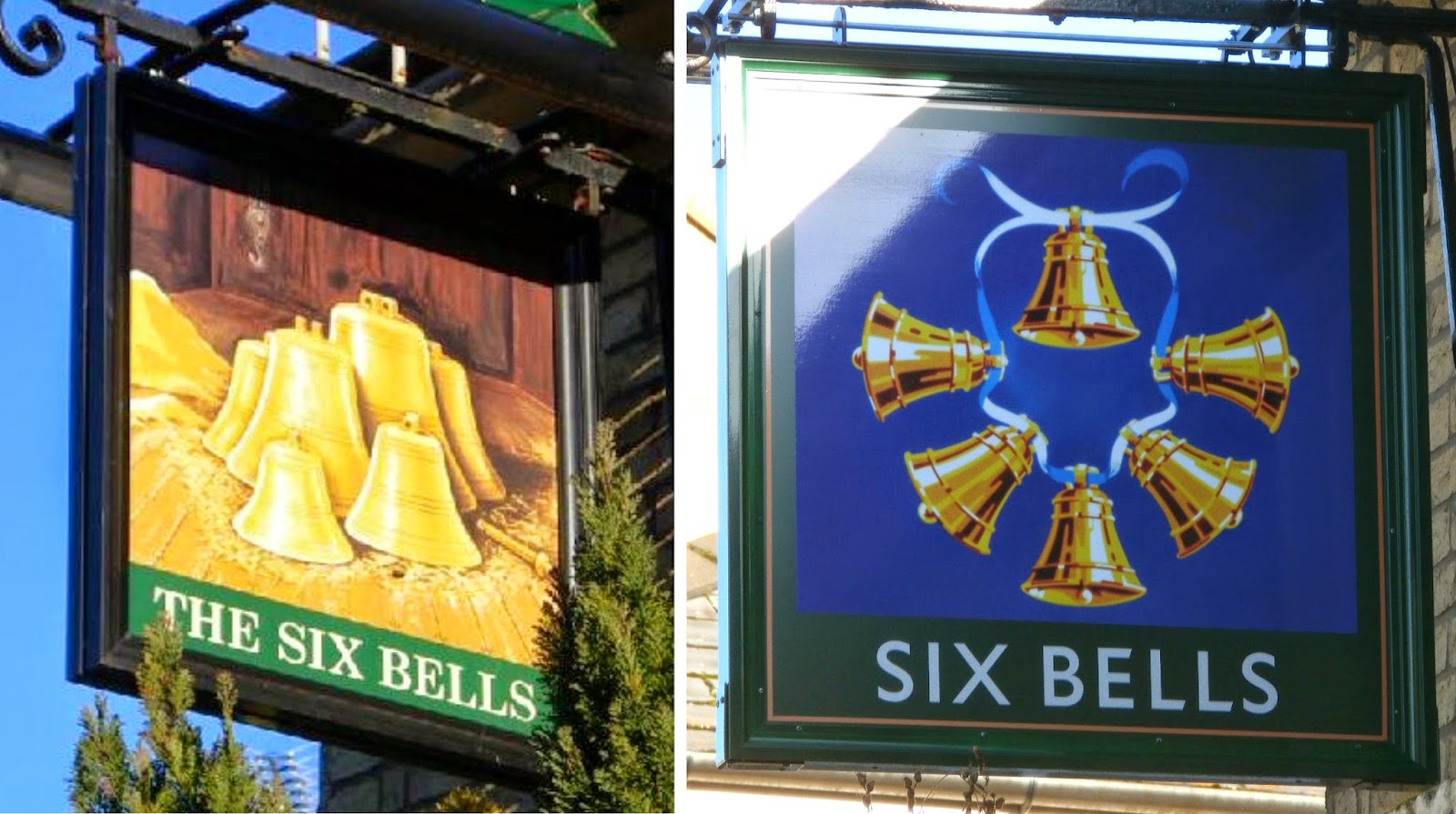 As for the name, well, there isn’t a church, with bells or otherwise, anywhere near the place, nor was there when the pub first appeared in the 1830s, and at no time since, so this one’s a complete mystery. If anyone knows, do get in touch!
Posted by Pubcrawler at 10:40 No comments:

Inside only, no standing on top

Back in the late 1980s, Suffolk brewery Earl Soham took over the derelict stable block of the long-defunct Cambridge Street Tramways depot, renovated it, and turned it into a pub. What an excellent way of giving new life to neglected part of Cambridge’s heritage! (In these less enlightened times a quarter of a century later the site would probably be cleared and a monstrously insensitive and incongruous seven-storey office block would spring up in its place.) Although sadly no longer an Earl Soham house (it was taken over a few years later by Everards), the pub still has an attractive sign, appropriately featuring a horse-drawn tram, whose design has survived at least one replacement.

Attractive, distinctive, eye-catching and appropriate to the building – an approach that a certain other brewer could learn from.

Is it a Cambridge tram?


Well, unfortunately, no, it isn’t. There are several clues, not least the leafy rural setting, which bears no resemblance to any part of the actual tramway. This I can put down to artistic licence and not think too much more about it, but some other inaccuracies are less easy to brush aside:

So, a commendable effort in the true spirit of what a painted pub sign should be like, but as is so often the case, the execution is let down by an absence of research.

Dalham Hall, which overlooks the picturesque little Suffolk village of Dalham, was for many years the home of the Afflecks, raised to the baronetcy (and therefore entitled to arms) in 1782. The family appears to have originated in Scotland, and the line, as well as the baronetcy, seems to have died out in the 1930s, in ignominy and in Australia.

According to the village’s website, the Elizabethan pub, which was one of the first buildings in the vilage to be erected (they had their priorities right in those days!), was named in honour of Lieutenant General Sir James Affleck (1759–1833), 3rd baronet, who was Colonel of the 16th Dragoons. (It’s an excellent pub, well worth an excursion.)

So, unlike some pubs I have mentioned previously, and others besides, here we have a pub named after the correct armigerous family. Full marks so far. The sign is a nice heraldic one, too. 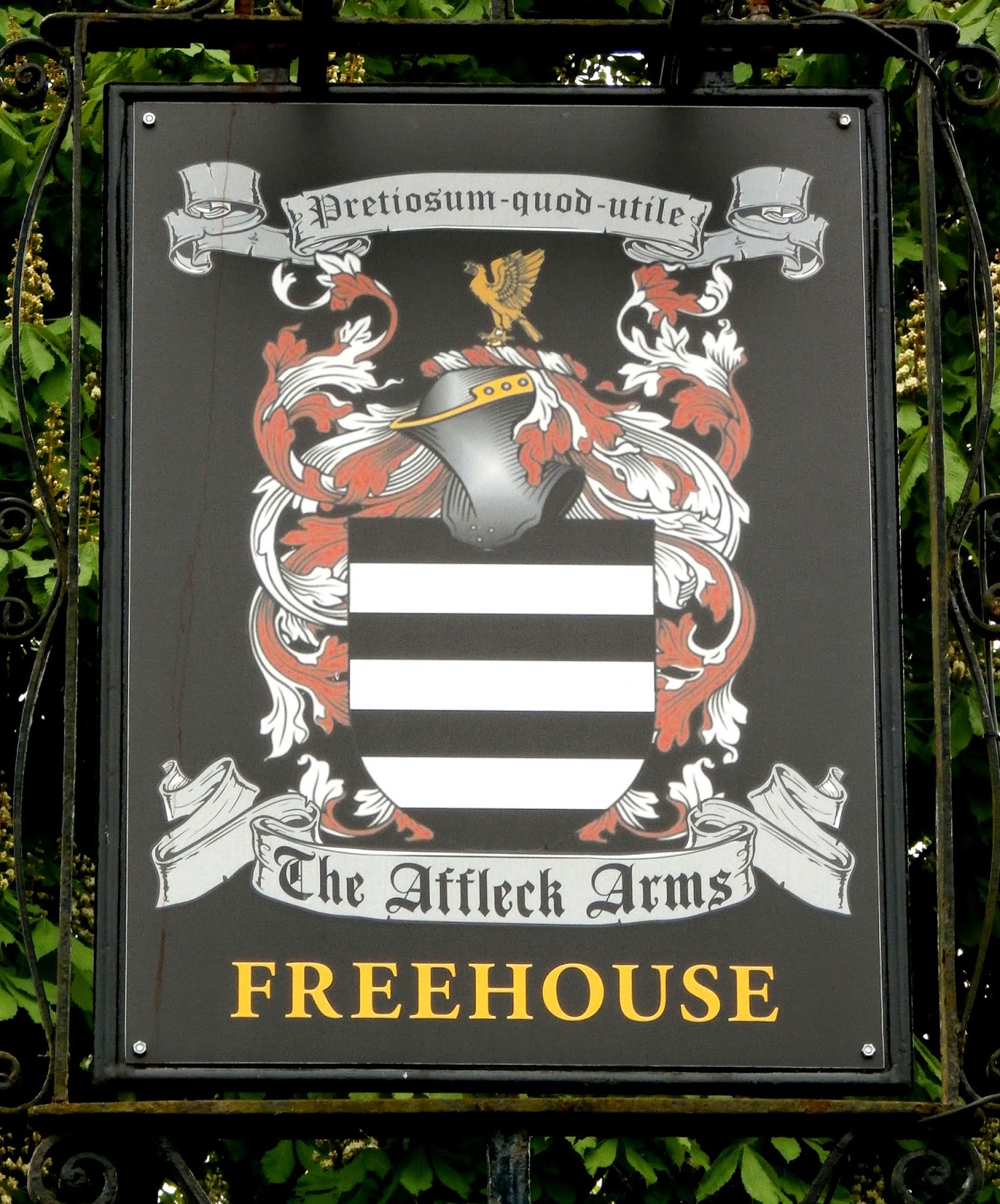 But, is it correct? Well, the style – the double scroll especially – makes me think of one of those dreadfully misleading ‘your family crest’ sites, but I can’t find anything online that it could have been taken from. So hopes are high.

From various sources[1], we can write the complete blazon for the Dalham Afflecks as follows:

This means that the shield should be white with three black stripes. This is what we see in the funeral monument of John Affleck (d. 1718), the first of the Dalham Afflecks, impaled with (presumably) the arms of his wife, Neeltje (née Schape, of Amsterdam). 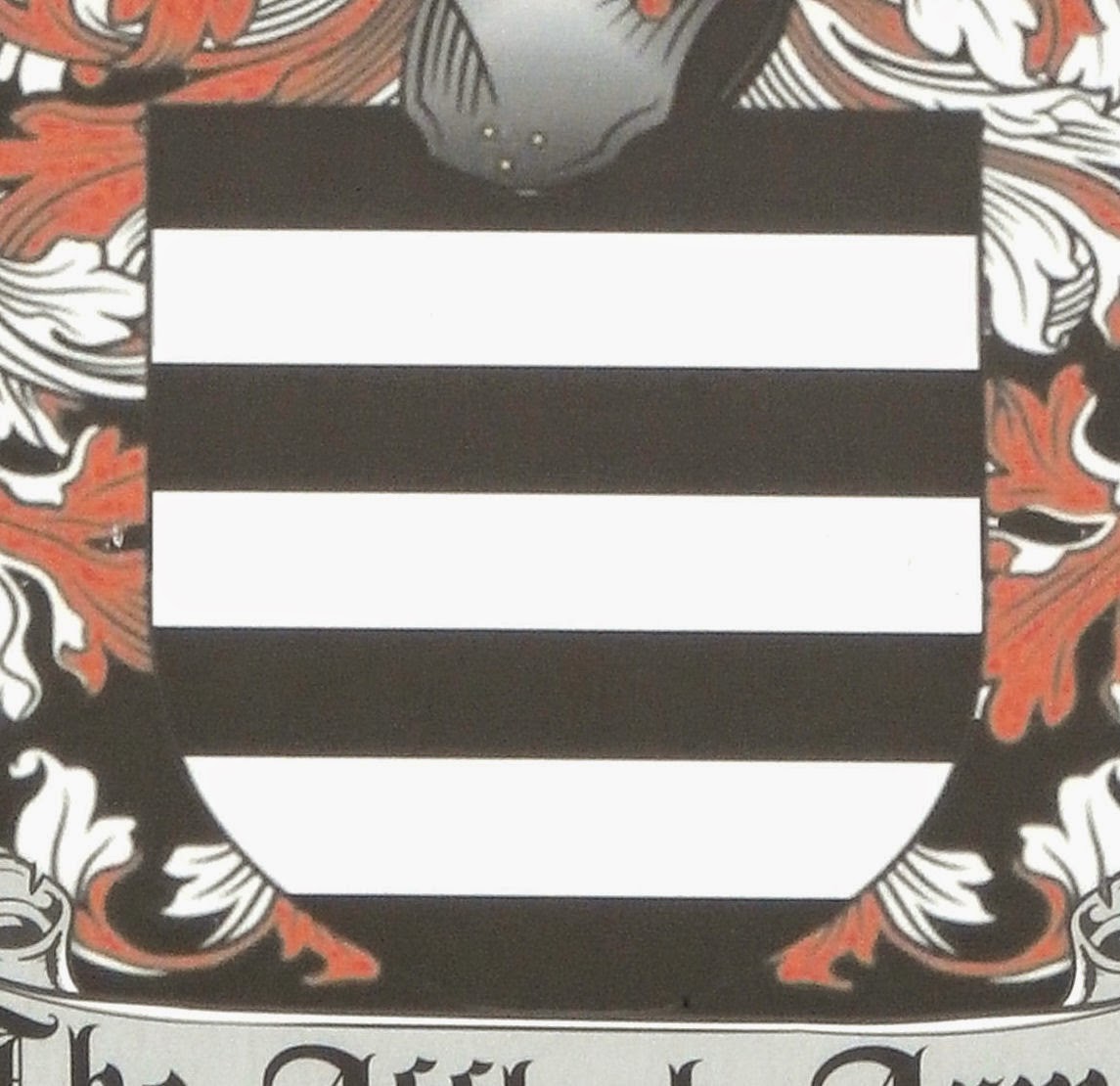 Count the lines. Oops! That’s black with three white stripes (sable, three bars argent) – the negative, those of a photographic bent might think, of what it should be. Perhaps the artist was given as a brief, not the clear and specific heraldic description, but the ambiguous instruction ‘seven horizontal black and white stripes’. Explicable, but still very disappointing and easily avoidable.


The same generosity cannot be extended to the crest, however.

Looks nothing like a heraldic ear of corn. (And while I’m at it, the mantling and torse ought to be the same colours as the shield, i.e. black and white, not red and white.)

The motto is at least correct – although English heraldry prefers it to be placed below, not above, and of course giving the name as well is superfluous.

So, it’s a perfectly attractive and detailed sign, no careless daub, but let down by a couple of easily avoided errors. My hopes were high, but I ended up more disappointed than delighted.


[1] The British Herald: Or Cabinet of Armorial Bearings of theNobility and Gentry of Great Britain and Ireland gives the arms as:


Encyclopaedia Heraldica gives only the crest, “an ear (or fleck) of rye ppr”.


The Heraldry Institute’s site give the arms (in French), and provides the motto as: